The browser you are using is no longer supported!

Please choose to download one of the following options for an improved browsing experience:

Vintage truck sales are soaring, and the Chevrolet C10 is leading the charge.  Here at Streetside Classics we’re very fortunate to witness the comings-and-goings of some of the best C10 examples the market has ever seen, with gorgeous trucks exchanging hands practically every week.  Running the gamut from impeccably preserved survivors to nut-and-bolt faithful restorations, Restomod/Prostreet modern specimens, and even Ratrod concoctions the likes of which only skilled artisans could imagine.  The C10 is alive and well, and our sales data illustrates that whether you’re thinking about buying or selling one of these hot trucks, there’s no time like the present.  The market is ripe, consumer interest/engagement is at an all-time high, and professional shops and garages are belting out some of the sweetest C10s we’ve ever seen.  Market fervor like this can easily lend itself to consumer confusion, exacerbated further when you’re dealing with a varied model like the C10.  Recent questions from our clients include: What era/year/trim actually constitutes a C10?  Which C10 is the most popular?  Should I go after a stock model, or is a Restomod the way to go?  Our dive into the C10 is overdue, and in this blog we’ll explore the model’s history, while also sharing some insight into the current market.  After taking a quick poll of our employees and colleagues and then coupling those answers with our relevant sales data, the result is clear: the C10 is Streetside’s favorite truck. Let’s see if we can better understand why…

“Baseball, Hotdogs, Apple Pie, and Chevrolet”.  As far as slogans go, it’s one of the better ones ever marketed to the American people.  Associating its brand with popular iconography that represents the fabric of our country was certainly ambitious, yet Chevy managed to pull it off.  Despite a history rich with Corvettes and Bel Airs, it still took considerable risk to be so bold as to insert a company name into the lexicon of Americana.  A company cannot simply will itself up onto the podium with those red-white-and-blue staples, it has to earn that position.  Chevy needed to underwrite such a grandiose claim, and there was still a lot of heavy lifting to do before Americans could comfortably accept such an audacious maxim.  Coincidentally, Chevrolet enlisted the very same instrument most of Americans enlist when “heavy lifting” is needed: the pickup truck.

Though, not just any pickup truck could handle the job.  Let’s be honest, you’re not about to read a blog about the Chevy LUV or the S-10. Those are fine trucks and they have their rightful place in another discussion, but we’re here to discuss a truck of much greater magnitude.  A truck that’s been a part of countless American households and businesses, has ingrained itself into our very culture, and literally helped build this country.  That truck is the Chevrolet C10.

Depending on where you grew up, in which era you were raised, or what vernacular your Pop bandied about, the “C10” may mean different things and/or go by other names: the C/K series, Silverado, Square Body, etc.  It can also represent varied eras of production: the Action Line, Rounded-Line, Old Body Style, etc.  We speak with thousands of clients each year and hear these model names used interchangeably.  Whether they have strict definitions or just loose affiliations, the one thing almost everyone can agree on is that GM built an incredible half-ton truck all these years.

Here at Streetside, we believe simplification is our ally when classifying models (with our sales/consignment volume we have no choice but to organize), and that principle is on display when we use the wide umbrella of the “C10” moniker.  For us (and the majority of the industry), the C10 is Chevrolet’s half-ton pickup made from 1960-1987, broken down further into separate generations: 1st generation (1960-1966); 2nd generation (1967-1972); and the 3rd generation (1973-1987).  Yes, there are C20s (3/4 ton) and C30s (1-ton) trucks to consider, and the 4x4 K10s are incredibly sought-after as well, but again our goal is to simplify.  We’ll leave out the K10s and the heavy-duty trucks for now, along with the up-and-coming 4th generation (1988-2002) Old Body Style ‘modern classic’ trucks that soar in popularity as each year passes. All those models will be omitted for the sake of clarity in this space, allowing us to explore the C10 through a simpler lens.  Now that we’ve set our own parameters, let’s break down the generations and some of their top examples.

The party has to start somewhere but before the C10 could be celebrated, Chevy had big shoes to fill.  Replacing the Advanced Design and Task Force eras (aka the 3100s and Apaches) was no easy task as those trucks had great success after the war, but with a shifting emphasis toward comfort, performance, and ultimately the muscle car era - change was necessary.  In came the all-new 1960 C10, redesigned inside and out and advertised as a truck that “…rides more like a car”.  To accomplish these car-like road manners, Chevy gave the C10 better weight distribution by increasing the load capacity of the front axle while shifting it back 2 inches, and by adding 5.6 inches to the front.  GM engineers enlarged the cab for better comfort, and with the windshield and back glass both taking up more surface area, visibility was drastically improved. Originally available in a 6.5-ft shortbed with a 115-inch wheelbase and an 8-ft longbed with a 127-inch wheelbase, the C10 also came in Stepside, Fleetside, Suburban, and panel truck body styles, along with a few trims.  The “Early 1st Gen” C10s (1960-1962) were the least popular and are therefore rarest today, never fully catching on. These years were distinctive in that they feature Chevy’s first independent front suspension (IFS) in a truck, featuring torsion bars up front and trailing arms with coil springs out back. With straight-axle trucks now dead and buried, Chevy further upgraded the IFS in the 1963 C10 by replacing the front torsion bars with coil springs. The hood and grilles of the Early C10s didn’t exactly make these trucks crowd pleasers either, but the 1963 front fascia redesign (featuring the famous egg crate grille and headlamp bezels), along with a new era of motors resulted in “Late 1st Gen” selling like hotcakes. From 1963-66, it’s reported that an astonishing one-third of every truck produced was a Chevy, led by the C10. Popularity of the “Late 1st Gen” C10s is still alive and well today, with 1963 as the best-selling model by a slight margin, although the ’64-’66 models are virtually indistinguishable from one another and are very sought-after as well.  Whether it’s full-blown survivor, or a slammed restomod with an LSX, the 1963-1966 C10s highlight the 1st generation.

We’ll do us all a favor and give away the secret: these are the most popular, best-selling, and most collectable C10s. Initially called the “Action Line”, these era of trucks was quickly dubbed the “Glamour Line” because there just so… well, glamorous.  We could bloviate for hours about what makes these trucks special, but the proof is in the pudding – look how beautiful they are!  In addition to the gorgeous redesign, the suspensions were improved (lowering the overall height of the truck to make it easier to get into), new motors and transmission were introduced (including the first big block made available in 1968), and trim lines made the already-improving interiors even more high-end.  The redesign also gave way to the birth of the Chevrolet K5 Blazer in 1969, one of the most iconic (and valuable) SUVs ever made.  Today, we sell more of these beauties than any other truck, with awesome stepside, fleetside, shortbed, and longbed models all flying off the shelf.  Whether it’s a Cheyenne Super or slammed Restomod and everything in between, this is the hottest truck on the market and shows no signs of slowing down.

Initially called the “Rounded-Line” series of trucks, the nickname never really took off. Later “Box Body” was a bit more apropos, but finally “Square Body” took over as the unofficial moniker.  Some enthusiasts will split these trucks into two camps, the “Early Squares” (1973-1980) and the “Late Squares” (1981-1987).  Early Squares ushered in a level hood, redesigned lights and an egg-crate grille insert that would be changed minimally through the years until 1980.  These early trucks sold well (sales especially picked up in ’75 thanks to luxury trim levels like the Silverado debuting) and are fairly popular today, mostly represented in original and restored-to-original form on the secondary market. The Late Squares sold even better and brought in another completely redesigned grille (this time with dual levels, and once again updated and slightly changed each year), stacked headlights, sloped hoods, a variety of motors, and less curb weight overall.  The 1983-87 “modern” C10s were hugely popular and featured the truck’s most powerful engines to date, culminating in the most popular Square Body year of all time – the 1987.  Most people agree that the 3rd generation C10 culminated in 1987 with the end of the “conventional cab” pickup, the subsequent name changes, and the introduction of fuel injection.  However, some argue that the early 4th generation trucks (1988-1991) should be lumped in as Square Bodies because there are many similarities, but the consensus is that they fail the eye test of a classic C10 truck.  We agree, these ’88-‘91 model years are on the modern GMT400 platform and should be categorized with the succeeding OBS trucks.

The Chevy C10 is one of the best-selling trucks of all time, and in the classic car game it’s the best-selling vintage truck in America right now.  There’s a lot of greatness to choose from amongst the models we listed above, and frankly we’re only scratching the surface.  It’s safe to say that the purchase of almost any C10 model is a safe bet, with some being more popular than others.  And that goes for style and quality of preservation/restoration as well.  Whether it’s a low-mileage survivor, a frame-off restored stocker, or a wild Restomod, you can’t go wrong with a C10.  There are plenty of options to choose from, and values and popularity are steadily increasing, so whether you’re buying or selling, you’ve picked the right horse.  “Baseball, Hotdogs, Apple Pie and C10s”. 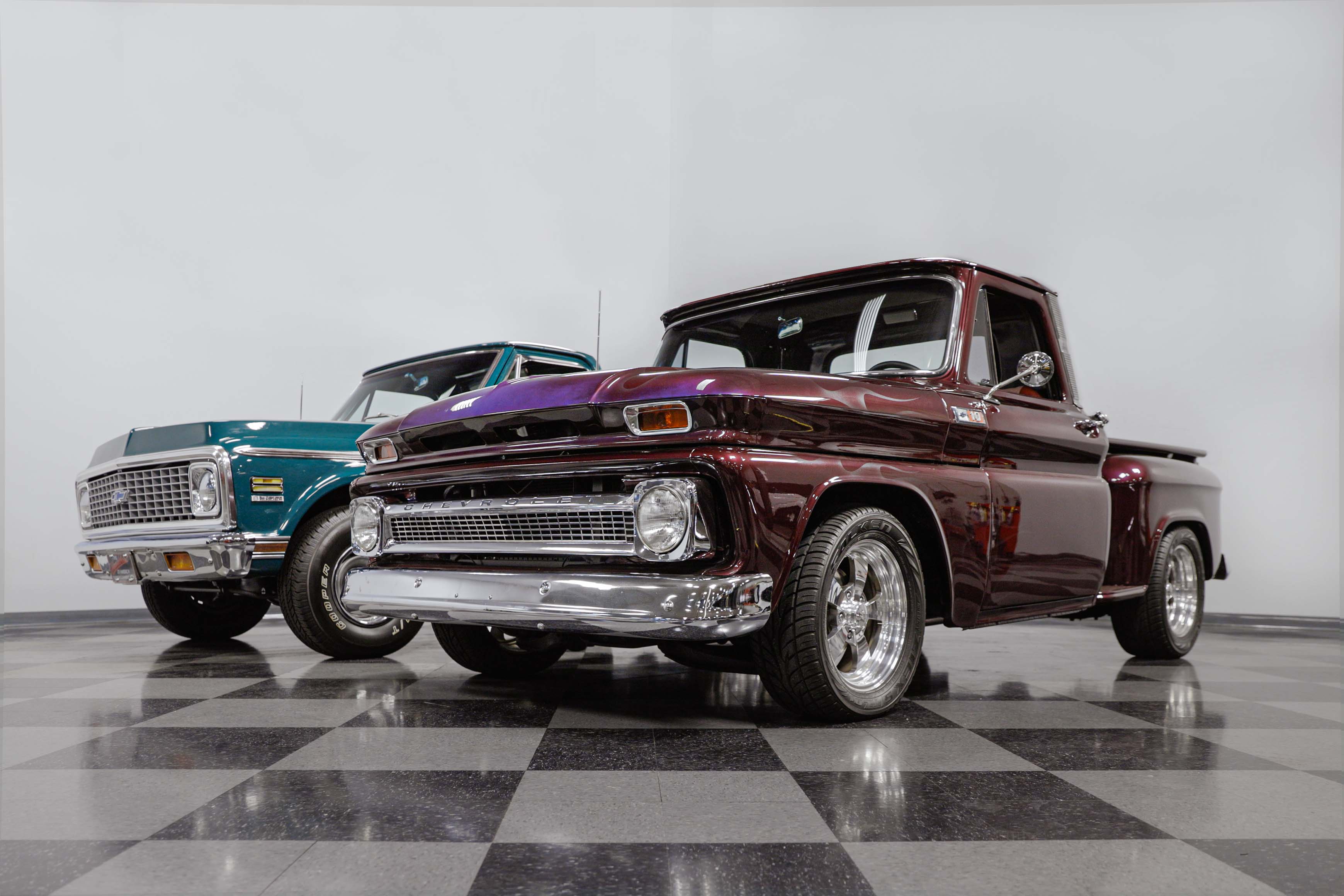